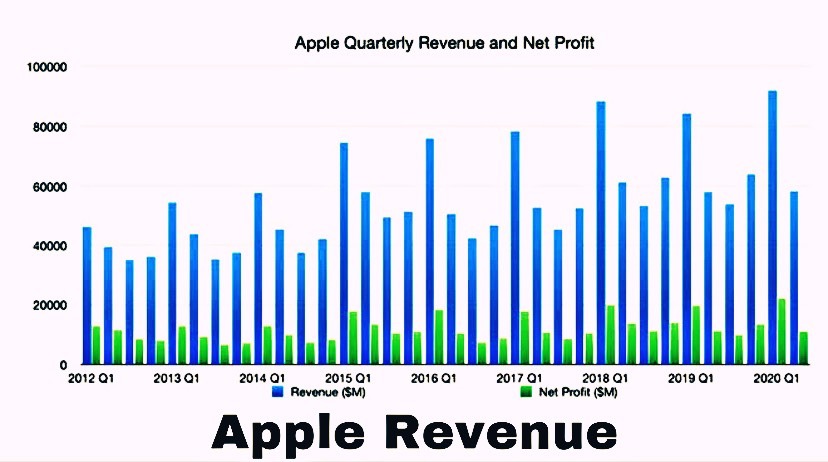 Friends, you know that Apple has overtaken Samsung in the smartphone market. Apple revenue has crossed three billion in just 3 months. Smartphone maker Apple announces quarterly revenue results for 2020-2021. At the beginning of 2021 alone, the revenue in 3 months was 111.4 billion dollars. And this revenue has increased by 21% over the year 2020.

Apple Company also made a profit of 28.6 billion dollars during the period. The iPhone has over 1 billion users. Apple Company has the highest revenue in the quarter. At present, the number of Apple users has crossed 1 billion. The iPhone alone contributes more than 65 billion dollars to Apple’s total revenue. Apple tops list of top five smartphone sellers in the last three months of 2020.

According to Mark Zuckerberg, Apple messaging app is not a secure app. He further added that the iMessage application coming in Apple Mobile is not safe. Its massaging is not exactly saved. Facebook is currently the biggest competitor against Apple.

Apple Company has set a record for the world’s largest earnings. Apple delivered 9.01 crore mobiles in the last three months of last year. During this year, Facebook’s revenue was 21 billion dollars. Of this, their profit was Rs 11.22 billion dollars. At present, the number of active users of Facebook has reached 1.5 billion. So far, samsung has been ranked first. But from now on, Apple’s name has come to the forefront.

Apple’s share of the world’s smartphone market has risen to 23.4%. And 2.01 crore smartphones have been sold.  Apple’s market is going very high these days. Not long ago, the iPhone 12 was launched. Apple’s stock has seen an increase due to its sales. The company has broken all records so far. And have reached the top. Friends, now all the people have become fond of iPhone.

Apple Revenue: Will apple revenue still be at the top?

Friends, in the present times, it is not clear which company will go ahead. Apple revenue has been good in 2020. The age of technology is going on now. The competition is fierce these days.

massive quarter for Mac and iPad!