What Hike is Remove from Google Play Store?

Friends have just noticed that messes in Hike have stopped being sent. The Hike Application notification read: ️‍”Wishing you a very Happy New Year! Today we’re announcing that after so many years of helping you deepen friendships, we will be shutting down Hike Sticker Chat at 11.59 pm on 14th Jan 2021. 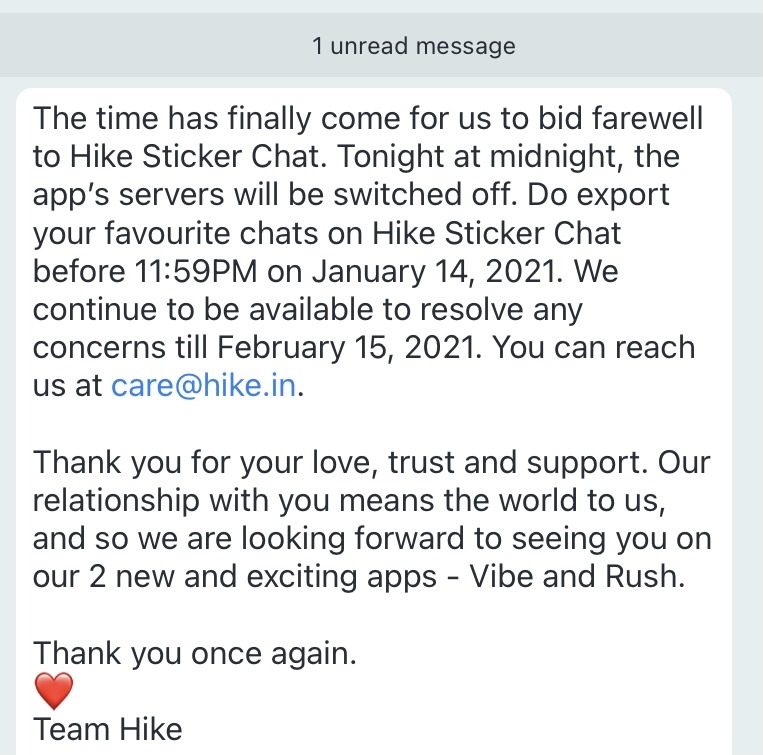 Hike Server is Switched off?

the time has finally come us to bid farewell. to app sticker chat. The app server is switched off. Some experts say they are increasing the server of hike stickers. Even people who have it installed on their phones may not be able to send messages. At the moment, even in WhatsApp, there is a discussion going on about the Privacy policy. As a result, many people have started uninstalling WhatsApp. hike is also becoming the talk of the town.

Why Hike is not on Play Store?

12/ Today we’re announcing that we will be sunsetting StickerChat in Jan’21.

We thank you all for giving us your trust. We wouldn’t be here without you ❤️

All your data will be available to download in the app. Your HikeMoji will continue to be available in both Vibe & Rush!

Friends you can all see in Google play store and apple store too. On 6 January 2021,  application users received an official message from the hike application, which revealed that they’re bidding a final goodbye to all users on 14 January 2021, at 11:59 pm IST.  In the announcement, Kavin Bharti Mittal (CEO) stated that all user data will be made available to download from inside of the  application. After the app has been shut down, HikeMoji will be made available in both versions, Vibe, and Rush.

India won’t have its own messenger.

Both are very good. As entities they have the right incentives (more aligned with consumers) unlike FB products.

It’s going to be one heck of a year. Thanks for tuning in!