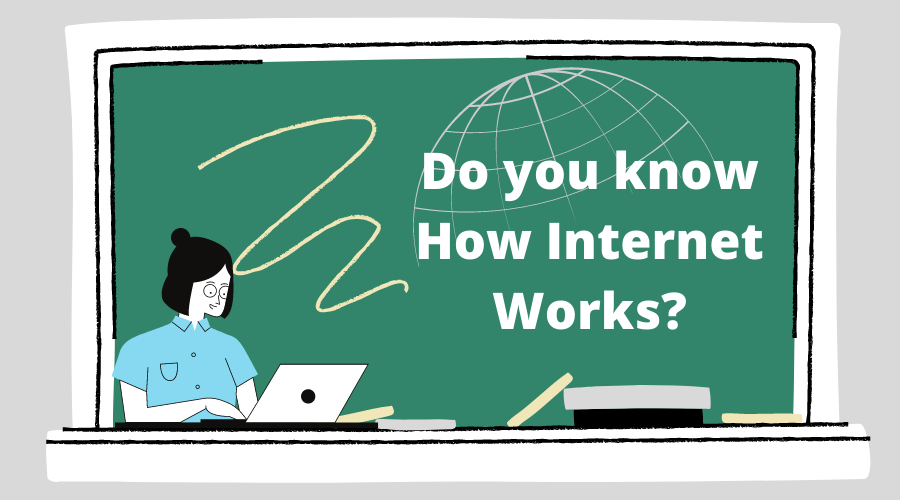 How does Internet work: Internet is the Whole Ocean for surfing and searching the Knowledge Online. Where you can pastime, growing your knowledge, chatting with friends and learn many of Skills through this Mini word but Massive network.

Today’s date Just imagine the Life without the Internet? Because everything from Shopping online to Watch movies everything in today’s era has been shifted to Online or Digital medium. People are investing their hours of time on Facebook, WhatsApp, Instagram and YouTube. There is a lot of craze from children to youth regarding online gaming.

From booking railway tickets to online shopping, people depend on the internet. It is the internet with the help of which you can talk to people sitting miles away on a video call. You can send your message to them. Have you asked yourself that how and when the internet started? How does the Internet work? Let us understand this in detail in this report of ours.

How did internet start?

Internet (international network of computer) means connecting two or more computers together. So Internet started about 50 years ago from now. It was the time of 1969 when man had stepped on the moon for the first time. At that time, the US Defense Office had appointed the Advance Research Project Agency ie ARPA.

During that time a network was created by connecting four computers together to make the entire mission successful. The job of this network was to share data with each other. Gradually more computers were also added to it. Many other agencies also started joining each other. Later the Internet was also opened to the common people.

How does Internet work: The Internet was basically Invented for the US Army to share its intelligence with each other.US Army Department developed the Internet in collaboration with the Massachusetts Institute of Technology under Advance Research Project Agency Network(ARPANET).

Friends, you must know that Godaddy is a famous website for taking domain. Where you can register your own domain name. But you may also be wondering how this website can sell domains? Who would have given them permission to sell the domain? Many such questions will come to your mind.

What is Metaverse and How it Works?

When and how did internet start in India?

How does Internet work: The Starting of Internet in India considered from back in 1986. At that time Government established the ERNET (Educational Research Network) with the help of Department of Electronics(DoE). During that time it was brought for research work. It would included country’s biggest IITs such like Mumbai khadagpur, Delhi, Madras, Bengluru, Kanpur etc. Then on 14th August, 1995 the Internet was launched for General publich by that time’s biggest Telecom company Videsh Sanchar Nigam Limited(VSNL).

When Internet was started in India, that time its Speed was only 9.6 kbit/s! although such a low speed, more than 10,000 Users were connected to Internet within 6 Months. Then Gradually Internet’s got Updated and growed and its Speed been rising.

After in 2004 Government made a policy under which Internet’s speed upgraded to 256 kbit/s or higher than it. Then the works also started on 3G and 4G technology. On 10th April 2012 Airtel launched its 4G Internet Service. and Finally on 5th September 2016 Mukesh Ambani launched their Jio Telecom company with 4G plans which massively gave competition to other Telecom companies and become the most successful telecom and internet provider company in India.

And finally on 1st October 2022, a 5G service on Ineternet has been started to India by Jio which is Jio True 5G! which gives upto 1 gbps speed of download. inaugurally it started first four cities of india as a beta version in Mumbai, Varanasi, Delhi and Kolkata. and till the end of 2023 entire India will be 5G facilitated is the target of them.

How does Internet Work?

Let us now understand step by step How does Internet work:

How does Internet Reach to You? :

So let’s here find out the details that How does Internet Work Actually:

The Main task of the Internet is to connect two or more computers together. There is a server room for the Internet in which all the information is stored. These servers work 24 hours.

These servers are connected to each other by Optical Fiber Cable. Internet also works with the help of satellite but its speed is less. Optical fiber cables are thinner than a hair. These cables are put in the oceans.

Through them, one country to another remains connected. Earlier, internet facility was provided only through telephone line, but today telecom companies allow people to use the internet through satellite for use in smartphones.

Now telecom companies have started providing internet facility through satellite. Internet is not controlled by any country or agency. There have been laid more than 8 lakh kilometers of optical fiber cables in the sea, in which 90 percent of our internet is used. These cables are laid at those places in the sea in which there is less loss and less cost.

There is still an authority to control Godaddy. And his name is ICNN( Internet Corporation for Assigned Names and Numbers). This is a non-profit organization. Which is located in Los Angeles. This organization has top level authority. The company may give permission to sell the domain to another website. It is up to this authority to decide what kind of domain it can be. Such as .com, .in, .info, .org, etc.

This organization sells top level domains to another company. A computer that connects to any mobile Internet makes the Internet. Also known as server. Whether it is your mobile or your computer or server, they are all connected to each other by wire. Underwater cables have been laid all over the world. Which connects all the computers in the world to each other.

There are a lot of companies in the world that deliver internet via wire to your home. Which is called ISPs(Internet Service Providers). Such as Airtel, Jio, BSNL, etc. And if the government asks to block any website, this company has to be blocked. Even so many people They get access to the website using the VPN application.

What is IP Address?

Who controls the internet?

Friends, the correct answer is that no one can control the Internet And it is also controlled by all of us. Because the Internet is a decentralized system. The Internet has been running since this system.

What are the Uses of internet :

How does Internet work: In today’s era, internet has become a part of our life. Today almost every office, bank, school, college etc. has been connected to the internet in one way or the other. Let us see in what ways we can use the internet:

Hope you all get the Information about What is Internet? How does Internet Work actually.. so if you found this Information really helpful then Kindly Share this article to all your freinds and relatives.