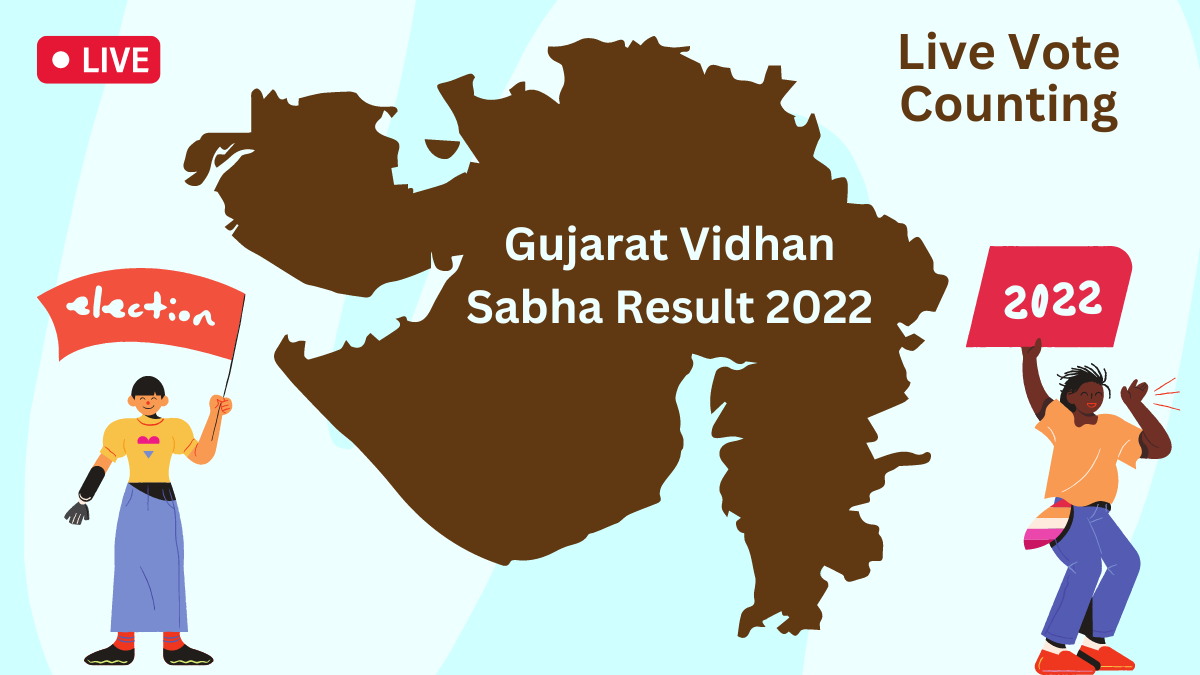 Gujarat Vidhan Sabha Result 2022 are coming today. Whereas the BJP is optimistic of retaining power in Gujarat due to the Modi factor. At the same time, the Aam Aadmi Party feels optimistic about its chances in the elections. At the same time, the Congress, which fought the BJP hard the last time, is hoping for better results this time. The Vote’s counting of Gujarat Vidhan Sabha Result 2022 has officially began today at 8th December at 8 a.m.

Gujarat Election Results 2022: The counting of votes for the Gujarat Vidhan Sabha election results is going on. BJP seems to be getting a infulencing lead. If the trends turn into figures, then even after 27 years, the BJP will once again be in power in Gujarat.

The Voting count is continues for Gujarat Vidhan Sabha Elections. In the trends till 11 am, BJP is leading in 155 seats, while Congress is leading in just 18 seats. Aam Aadmi Party is leading on 07 seats while others are leading on 02 seats.

Well The Congress Party fought the BJP hard in the 2017 elections. However, exit polls reveal that the Aam Aadmi Party has spoilt the Congress’ plan this time by slashing votes. In Gujarat, 37 counting centres have been established to tally ballots. The Election Commission has sent 182 counting observers, 182 election commissioners, and 494 assistant election officials to help with the counting.

What is the Prediction of Gujarat Vidhan Sabha Result 2022 :

Gujarat Vidhan Sabha Result 2022: In the exit polls, BJP is seen forming the government once again in Gujarat.

That is, the people of Gujarat have renewed their trust in Prime Minister Narendra Modi. If the exit polls are correct, the BJP will easily become the government for the seventh time. The BJP is predicted to win 131-151 seats in Gujarat, according to India Today Axis My India. While Congress is likely to gain 16-30 members. And the Aam Aadmi Party has a chance of winning 9-27 seats. Others may be allocated up to eight seats.

Hardik Patel, a BJP leader and contender for the Viramgam seat, stated that the BJP is gaining in Gujarat. The BJP will constitute the state government. For many years, there have been no riots in Gujarat.

Well Reports are coming that Prime Minister Narendra Modi will address BJP workers after the results of Gujarat and Himachal Pradesh. According to sources, PM Modi will address the workers by coming to the BJP office on six occasions this evening.

In the trends in Gujarat, the Bharatiya Janata Party is once again seen doing a clean sweep. BJP is leading on a record 149 seats this time. As a result, there is a festive spirit among the workforce. Workers outside the BJP headquarters in Gandhinagar are dancing to the rhythm of drums. Gujarat Election Result 2022

BJP leading on 149 seats of total 182 seats, as per ECI trends pic.twitter.com/rfuAusbO3z

In Gujarat, BJP seems to be getting majority in the trends, due to which there is an atmosphere of celebration among the workers. BJP MP from Surat and Union Minister Darshana Zardosh said: “BJP fulfilled all the promises made to the people of Gujarat. The people of Gujarat have voted in the name of development.1”

Also Gujarat BJP state president has claimed that his party will win more than 160 seats in the state. He said, Gujarat’s victory is the victory of Prime Minister Modi’s plans, the people have stamped on “Modi Mantra“.

But Here are some Negative Reports coming of Suicide..

Congress candidate from Kutch’s Gandhidham tried to commit suicide by tying a noose around his neck at the counting station. Bharat Solanki alleged that the EVMs were not sealed properly and some did not have signatures. The Congress candidate was accused of rigging the EVM and sat on a dharna in the counting room and even after that tried to commit suicide when no action was taken on his allegations.

Congress has admitted for the first time that the Gujarat trend is against them. Made serious allegations against the Election Commission. According to Congress state president Jagdish Thakor, “The trend is not opposite to us. We shall accept the people’s verdict.”

BJP won 127 Seats back in 2002, but that record has also broken now it seems. Means BJP is gonna be Win in Gujarat Vidhan Sabha Elections this year. Exit poles also showing according to that. and Aam admi party and Congress has hopes that BJP won’t able to beat them but Results will show the truth very soon. In 2002, Narendra Modi was sworn in as the Chief Minister of Gujarat for the second time.

So Who was harmed by you in Gujarat? :

Gujarat Vidhan Sabha Result 2022: Now the question arises that who has benefited and who has been harmed by Aam Aadmi Party’s bragging in Gujarat? If seen directly, only and only Congress had to suffer loss here. In fact, the Aam Aadmi Party, which is trying its luck for the first time in the Gujarat elections, got 13.2 per cent vote share, while the BJP got 53.5 per cent vote share. Here the vote share of the Congress remained only 26.7 per cent, which was 41.4 per cent in the 2017 elections.

Which Party has to Suffer a lot in Gujarat Vidhan Sabha Elections? :

Whether it is about Gujarat assembly elections(Gujarat Vidhan Sabha Result 2022) or Delhi MCD, only Congress has suffered a lot during this times. It has become clear from the results of both the places that Congress has now become the third party in front of BJP and Aam Aadmi Party. Not only did the Congress lose seats in the MCD as well as in Gujarat, but its vote share also declined significantly. The direct reason for this is that the Congress does not have such a face, which can show strength for the party in both the elections.

So let’s see The time will Say that who will win this Gujarat Vidhan Sabha Result 2022 and Claim the Believes of Gujarat Audience.